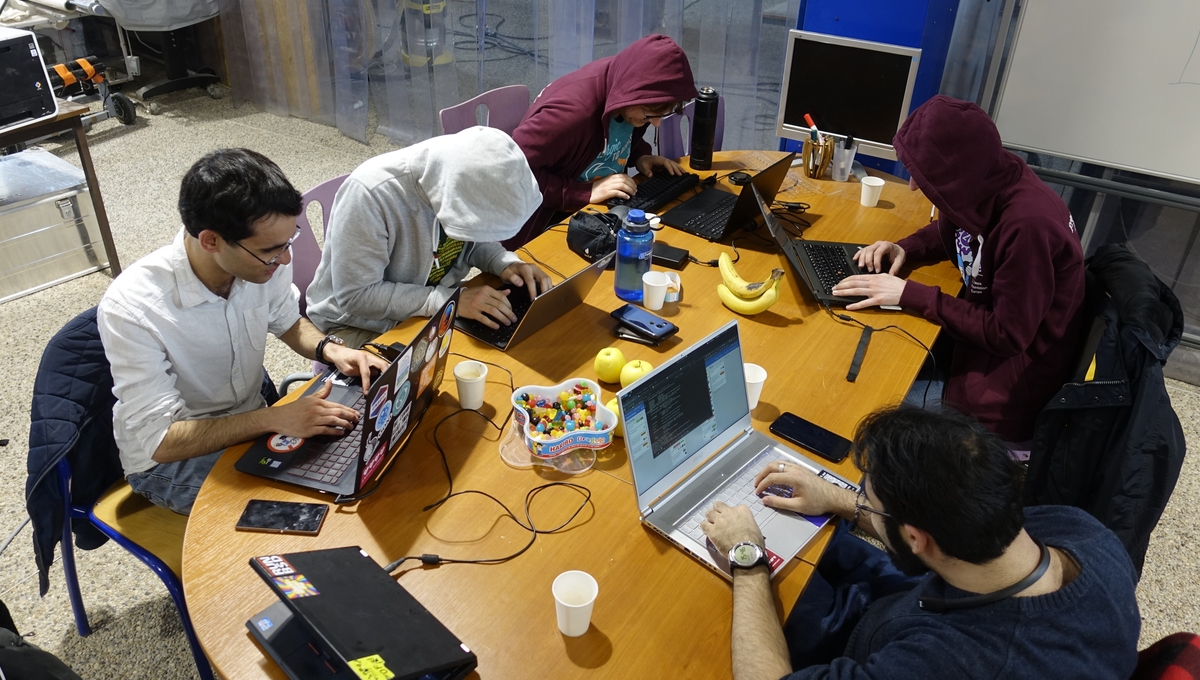 Hackers in their natural working environment. For the picture we took off the black ski masks and gloves.

For the 4th time, and less than 5 months after the last meeting, the FSFE System Hackers met in person to coordinate their activities, work on complex issues, and exchange know-how. This time, we chose yet another town familiar to one of our team members as venue – Lyon in France. What follows is a report of this gathering that happened shortly before #stayhome became the order of the day.

For those who do not know this less visible but important team: The System Hackers are responsible for the maintenance and development of a large number of services. From the fsfe.org website’s deployment to the mail servers and blogs, from Git to internal services like DNS and monitoring, all these services, virtual machines and physical servers are handled by this friendly group that is always looking forward to welcoming new members.

Interestingly, we have gathered in the same constellation as in the hackathon before, so Albert, Florian, Francesco, Thomas, Vincent and me tackled large and small challenges in the FSFE’s systems. But we have also used the time to exchange knowledge about complex tasks and some interconnected systems. The official part was conducted in the fascinating Astech Fablab, but word has it that Ninkasi, an excellent pub in Lyon, was the actual epicentre of this year’s meeting.

Saturday morning after reviewing open tasks and setting our priorities, we started to share more knowledge about our services to reduce bottlenecks. For this, I drew a few diagrams to explain how we deploy our Docker containers, how our community database interacts with the mail and lists server, and how DNS works at the FSFE.

To also help the non-present system hackers and “future generations”, I’ve added this information to a public wiki page. This could also be the starting point to transfer more internal knowledge to public pages to make maintenance and onboarding easier.

Afterwards, we focused on closing tasks that have been open for a longer time:

Then, it was time to deal with other urgent issues:

The next steps and developments

As you can see, we completed and started to tackle a lot of issues again, so it won’t become boring in our team any time soon. However, although we should know better, we intend to “change a running system”!

While the in-person meetings have been highly important and also fun, we are in a state where knowledge and mutual trust are further distributed between the members, the tasks separated more clearly and the systems mostly well documented. So part of our feedback session was the question whether these meetings in the 6-12 month rhythm are still necessary.

Yes, they are, but not more often than once a year. Instead, we would like to try virtual meetings and sprints. Before a sprint session, we would discuss all tasks (basically go through our internal Kan board), plan the challenges, ask for input if necessary, and resolve blockers as early as possible. Then, we would be prepared for a sprint day or afternoon during which everyone can work on their tasks while being able to directly contact other members. All that should happen over a video conference to have a more personal atmosphere.

For the analogue meetings, it was requested to also plan tasks and priorities beforehand together, and focus on tasks that require more people from the group. Also, we want to have more trainings and system introductions like we’ve just had to reduce dependencies on single persons.

All in all, this gathering has been another successful meeting and will set a corner stone for exciting new improvements for both the systems and the team. Thanks to everyone who participated, and a big applause to Vincent who organised the venue and the social activities!